I Have to Get Something Off My Chest

I referenced in my blog post Let Me Explain that I don’t really like revealing every meaning behind a story. As a writer, I like to let the reader figure out what I’m trying to tell them hidden between the lines of a story. But there’s something that I do want to talk about in regards to what I wanted to convey with my novel, The Un-Life of William Moore. But I assure you, it isn’t the only meaning I had intended! Just perhaps the most obvious one. So don’t forget to keep looking for more meaning.

I’d honestly rather my first novel be something more unique and game changing. Because I’m sure there’s going to be a multitude of people out there that are going to groan and go “Uggggh, another vampire book, just what the world needed.”

And that’s the point. This novel is the response to reactions like that.

-Depths in the Shallows-

The biggest theme present in The Un-Life of William Moore is not to judge a book by its cover – to not stereotype – to realize there’s more to something than what is on the surface.

The subject of the story, William Moore, is a vampire, but he’s a pathetic one. He’s weak, he’s shy, and has a very forgettable looking face. Remove the fact that he drinks blood and he’s basically homeless, friendless, and struggling to get basic commodities like clothing and food in a cruel world that only seems to try and hurt him. I’d compare him to a kicked puppy on the side of the road in a box in the pouring rain. My goal was to make him the most human character in the whole book. The outsider, the victim, the misfit, just trying to find out where he belongs. 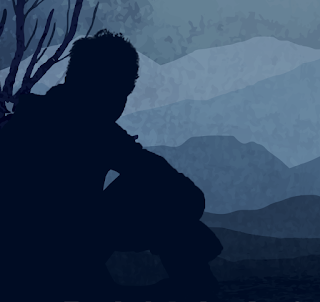 The narrator of the story, a college student named Kaylah Rhodes, spends a lot of time in the story assuming and stereotyping William herself, despite her best intentions to keep an open mind. He’s nothing what like she expected and he continues to prove her wrong again and again.

But there is a darkness to him too – just like everyone. His awkward, plain appearance is unassuming, but there are depths to him that cannot be overlooked. William is not the narrator, and we can only see what the narrator sees of him. What is he up to when he’s not being observed? We have to rely on his word and his actions to understand him. We only get half the story, just like we get from gossip and rumors.

And that is the point. Yes, it’s another vampire story. No, the world probably didn’t need another one. I could have just as easily written about a homeless vegan or something. But there’s something about urban fantasy – that slight twist on reality – that makes it more intriguing, in my opinion. It would also be harder to humanize someone that’s already human. I didn’t really like Frankenstein by Mary Shelly because I just found her style uninteresting (what was her obsession with the word “wretched?”), but I really appreciate the story she was trying to tell – the creature isn’t the monster, he’s the victim; it’s the creator that is the monster for being so cruel to his creation.

The Un-Life of William Moore is not a paranormal romance. It doesn’t even have a happily ever after. And, honestly – I consider pretty much every character, including William himself, to be unreliable narrators. I’m not entirely convinced that William is all that he appears to be, even when his secrets are revealed. And I wrote the book! Don’t ask me how that happened. Sometimes the end result just isn’t what you’d expect it to be. I can’t really tell you truthfully if I think that William is trustworthy. Or Kaylah, or anyone else.

The Un-Life might not be on a very unique subject, but I hope it’s unique enough for you to try it. I hope you won’t be disappointed.


P.S. - It's not too late!  You can still get a free copy of The Un-Life of William Moore as an ebook by supporting it on Kindle Scout.  All voters get the ebook for FREE if it's selected by Amazon for publishing!