July 30, 2018
Welcome to a new segment on my blog I like to call Dana Harts! It's a silly pun on like "I ♥ NY" T-shirts and things like that. Dana Harts will be about things that I love, specifically literature and movies that I recommend.  A sort a recommended reading/watching list, if you will.  I'll try to give you enough information about what makes this stuff amazing without spoiling anything important.

Today I'll be talking about how much I ♥ Siren's Lament!

Siren's Lament is a web comic on Line WebToons by instantmiso.  It's free to read, it's beautiful, and it's pulled at my heart strings unlike anything else in a long time.  It's a love triangle with hot mermaid men.  What more do you want?


The story follows a flower-shop owner Lyra, who is broken hearted because her best friend/crush is dating another woman. When her heart finally reaches it's breaking point, she goes to the ocean's edge and there she hears a hypnotic voice offering to take away her suffering.  She slips and falls into the water, where a male siren then catches her and kisses her.

She wakes up on the beach next to a hot and egotistical guy that claims that her kiss turned him from a siren into a human.  She doesn't believe him, until they fall back in the water and they both grow fins!  But that's not right, he said.  The curse was supposed to be transferred from him to her, but instead they now shared it. 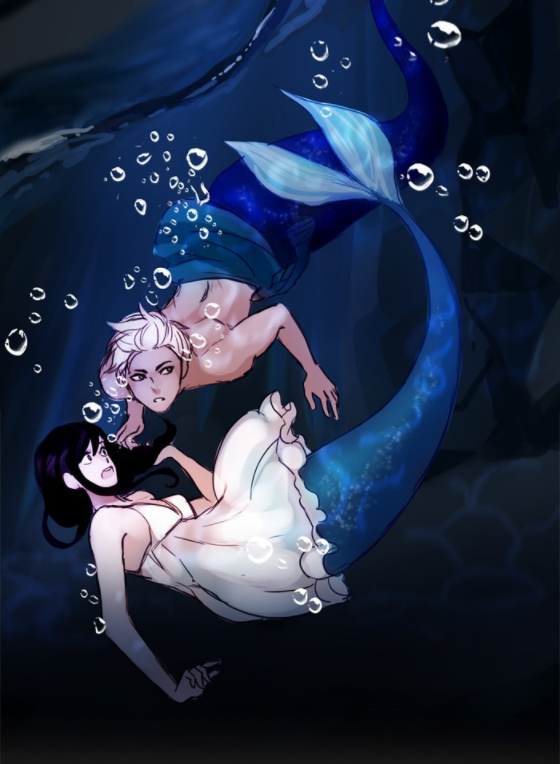 Being a siren is a curse that turns heartbroken humans into lonely fish people that wander the ocean searching for another broken hearted person to take their place so that they can become human again. When turned into a siren, the person loses all of their memories, including the thing that made them so heartbroken in the first place, giving them a second chance at a human life.  But something went wrong when the siren, Ian, tried to switch places with Lyra. They can both walk on land, but when they get in the water, they sprout fins.  Now they have to work together to lift the curse off themselves before Lyra loses all of her memories and fully turns into a siren.

Siren's Lament has perhaps the most beautiful art for a comic that I have ever seen. Her male love interests are heartbreakingly beautiful with believable goals and mannerisms. The anatomy is realistic and the vivid facial expressions really make the characters pop off the page.  The world she weaves is rich and simple.

Fortunately and unfortunately, the story is still in progress, so there's still more to be had but you have to wait a week for each new chapter to come out.  At the time of this post, there are 107 chapters released.

You can get the Line WebToons app on Google and iOS.

I'm sorry/not sorry for sharing this addicting comic with you. Enjoy!

All art on this blog post belongs to the author, instantmiso.