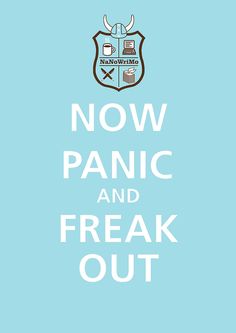 NaNoWriMo is upon us, and I've elected to use my 50,000 words to make a dent in, and hopefully finish, my novel-in-progress called "Blood Knights."

I've made a new NaNo account for my pen name projects and added information about the novel to my account, including the synopsis and an excerpt.  The excerpt takes place several chapters into the novel, but it's a relatively neutral piece that doesn't spoil anything and doesn't need much explaining if you read the synopsis, so it seemed like a good fit.

To save you a click, here is the synopsis if you think it's something you'd like to read:

The city of Danube is home to three separate vampire covens: the Tepes in the north, the Bathory in the west, and the de Rais in the south. These three clans have been at relatively peaceful odds for centuries, with themselves and the vampire hunters that also call Danube home. However, now tensions are beginning to escalate for control over the lawless east, war is on the horizon, and the innocent human citizens have no idea it is happening.

Archer Mathews is a vampire hunter that has spent over ten years fighting the undead and protecting the human population of Danube. One terrible night, he is transformed into the creature that he hates most. Now a vampire himself, Archer is attempting to find purpose in his new un-life, while also trying to keep his vampirism a secret from his fellow hunters who would kill him, and the coven leaders who would use him. While figuring out how to survive his warring natures without going mad, Archer uncovers the dark plots unfolding within the heart of Danube. Can he stop the factions from going to war, or will he have to take a side and fight?

Blood Knights is something I've been writing on for quite some time.  Currently I'm hovering at around 46,000 words.  I'd like to get it up to 80,000 before calling it done.  But what about the rest of the 16,000 words of NaNoWriMo?  Well, Blood Knights is likely going to be a series of two, maybe three books. If I'm lucky I can get a-going on the sequel before NaNo is done.

Check out my NaNoWriMo profile to keep an eye on my progress or to become my writing buddy.  Holler at me on Facebook, Twitter, Instagram, or in the comments below if I get behind on my word count by more than 5000 words.  I need a good kick in the pants for motivation sometimes.

If I'm ever ahead of my game, I have intentions to write about NaNoWriMo on this blog.  How to stay motivated, how to get around writers block, tips and tricks to help you meet your goals.  Take it with a grain of salt, because I've never actually won NaNo before.  I've tried twice and failed both times.  Third time is the charm? 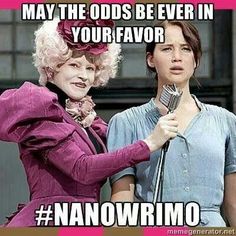 Now get out there and write that novel!